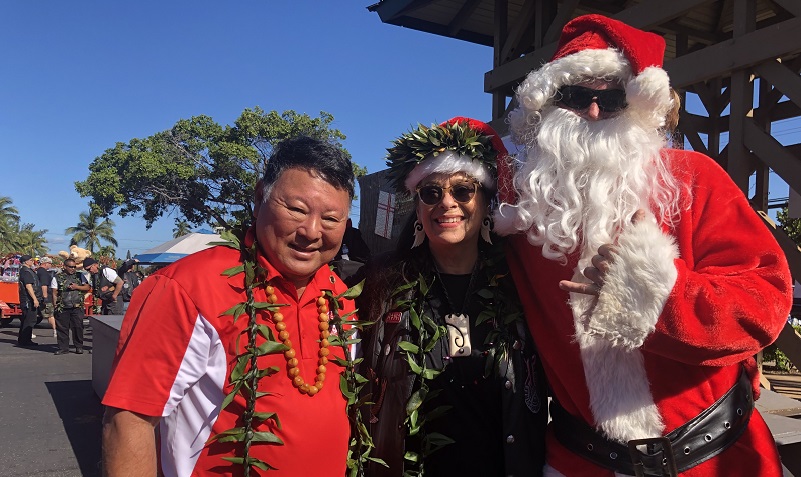 Street Bikers’ United, in support of Toys for Tots.

Motorcycles start rolling in at 8:00 AM, with a Bike Giveaway, Social ‘See and be Seen’ while checking out all the cool Motorcycles…

Kickstands up at 10:00 AM after the group photo. Ride to Minit Stop in Lahaina, before riding to the VFW in Kihei for the After Party.

Kanekoa describes its music as ukulele powered Hawai’ian reggae folk rock. Kanekoa has been playing together since 1999, melding elements of Hawaiian, Rock, Folk, Blues, Reggae and improvisation into a truly unique sound.  Kanekoa is one of Hawaii’s premier live music experiences. Because their sound is based on the yet untapped potential of the electrified Hawaiian ukulele, inspired by the range of musical tastes of its players, and shaped by the land and culture of Hawai’i, Kanekoa has discovered a land of limitless musical possibility. In short, you have not heard or seen anything like this before. “The band is amazing, and Vince is amazing” —Mick Fleetwood

Bad Kitty with 4 lead vocalists, is all about variety, great harmonies & all the songs you love to sing along with…

If you have not already gotten up to dance, Bad Kitty will get you on the dance floor!

808 Street Grindz Food Truck will be on hand to purchase hot Brisket Sliders, Grilled Meat and Cheese Sandwiches and more.

What After Party would be complete without a Bar? For those of us over the age of 21… Beer, Wine and Well Drinks will be available for a donation (with script).

Raffles will be pulled several times during the After Party, and we have lots of great prizes! From Restaurant Gift Cards, to Truck Straps, to a BBQ Grill….

While we have many raffles prizes to give out, the top 3 are:

Any cookies that may not be particularly necessary for the website to function and is used specifically to collect user personal data via analytics, ads, other embedded contents are termed as non-necessary cookies. It is mandatory to procure user consent prior to running these cookies on your website.